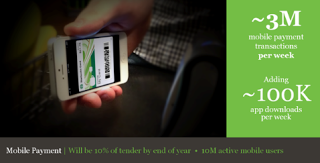 Starbucks chief digital officer, Adam Brotman, has revealed at the annual shareholder meeting that the company is now taking more than 3m mobile payments in the US every week. “We’re a leader and its accelerating. At this rate, about 10 per cent of all tender in US stores will be mobile payments by the end of this year,” he said.

Speaking to investors, Brotman said that the company now has 10m active monthly users on iOS and Android. “We’re adding another football stadium every week, about 100k downloads,” he added. The company’s mobile sites and apps combined reach 34.8m unique people every month, “more traffic than the amount of web visitors to the New York Times and Wall Street Journal combined.” Mobile app users will now be able to collect loyalty points and pay using their smartphones in Starbucks’ new Teavana stores.

Starbucks CEO Howard Schultz opened the annual event with news that the company is nearing its all-time high valuation, currently standing at $43bn. In the last three months, it has opened its first store in India, along with its first and 800th in China.

Despite recent scorn for tax avoidance, Starbucks was named the fifth most admired company in the world by Forbes.

Super villain Mahmoud Amadinejad, President of Iran took to the stage at the UN summit in New York – but what did we hear?

The US delegation walked out. European countries followed.

Newspapers heard ‘9/11 was an inside job’– the easy headline, and the news desk knock off early.

“He would say that,” we all agree, and duly switch off.

The US and UK pride themselves on freedom of speech. I disapprove of what you say, but I will defend to the death your right to say it.

So why do we all ignore him so compliantly?

On nuclear proliferation, a sore topic, he says nuclear energy would give Iran a cleaner and cheaper alternative to fossil fuels.

Although allowed under the UN Non-Proliferation Treaty (NPT) he argues the Security Council “have equated nuclear energy with the nuclear bomb, and have distanced this energy from the reach of most nations”.

While at the same time these members expand their arsenals despite the NPT prohibiting stockpiling of arms and calling for disarmament.

Like 9/11truth.org, a non-profit whose views Time Magazine called “a mainstream political reality”, Ahmadinejad asked for a UN inquiry into 9/11.

He queried why one wasn’t done immediately and then according to the outcome, measures could be taken against the wrongdoer.

Where one turns off, and how the media summed up the speech was with his claim that most people agree that 9/11 was orchestrated by the government, to invigorate America’s economy and strengthen Israel.

Another viewpoint he says, advocated by American statesmen is that a sophisticated terror network executed the attacks.

It is undeniably this that most people believe.

In light of that, he questioned the rationale of a “classic war” that led to hundreds of thousands of deaths if it is not a classic threat.

Look back at the title of this blog, these are words taken from Ahmadinejad’s speech.

He offered to hold a conference in Tehran next year about terrorism and how to confront it and proposed that 2011 should be the year of nuclear disarmament.

Why don’t we jump at the chance to get a Muslim insight into motivations for terrorism? And why shouldn’t 2011 be the year of nuclear disarmament?

“Nuclear energy for all, nuclear weapons for none” he said.

Let’s take up his offers, and then if he falters, we can with authority do what many people do as soon as he starts to speak.

Dying for a cuppa?

I was not surprised that our flat-capped ‘friends’ at Tetleys, whose parent company Tata have been accused of human rights violations relating to a factory death, have ‘distanced themselves’ from blame.

Like BP over the summer, someone else was making the calls, none of the tea made in this factory tainted British tea cups.

Just so long as nobody’s blood went into my drink, carry on.

For what I’m sure is monotonous work, and the death from suspected poisoning confirms it is dangerous, workers only get paid 8p a day.

And I suppose the company did not know this either.

Names we should be proud of exploit labour to keep prices low in the UK, while keeping their hands far enough away that if anything happens, “we didn’t know anything about it”.

Who are the real terrorists?

For the full text of Ahmadinejad’s speech, with more of his interesting assessments of the world de facto go to http://tinyurl.com/3yo6rwk.

First published for Oxfam at http://tinyurl.com/353xb8w

Americanisation is often seen as damaging to other nations’ cultures.

But the US’s influence on what the world considers important can only have helped Haiti after the earthquake six months ago.

Hundreds of Haitians have escaped poverty for fame in the United States, as sports stars, models and musicians.

And with the island’s close proximity to the superpower and the sheer force of the disaster, fundraising happened on a massive scale.

But half a year on the BBC has begun asking whether stalled progress, shown by news outlets here, will deter such a concerted response in the future.

Why so little progress?

Before the earthquake, Haiti was one of the poorest countries in the world.

Less than half of the 2.8 million people living in the capital Port-au-Prince had access to electricity.

Social services were similarly poor, with many children not attending school, 38 percent of the population over the age of 15 illiterate and unemployment at 30 percent.

No amount of aid, especially in a crisis, can change the structure of a country overnight.

The death toll of 222,570 means there are hundreds of thousands of people still experiencing grief, hardly great circumstances to face rebuilding their lives.

Another 300,000 were injured, and presumably family members are now caring for them, another, often invisible drain on human energies.

One and a half million people are living in temporary housing- tents, corrugated iron and tarpaulin- amongst the 19 million cubic meters of rubble from the collapse or damage of 188,383 houses, 3,978 schools and 30 hospitals.

A quarter of the civil service were killed in the disaster and government buildings were destroyed- the very people and resources necessary to co-ordinate the clean up.

So will it deter response?

For people to give, they must appreciate the extreme circumstances that a natural disaster presents- it could happen to any of us- and go into it with the knowledge that rebuilding large areas of a country takes time.

Adding to that the context of poor infrastructure, which increased the scale of destruction, means time for planning a useful and permanent build is equally understandable.

To make sure that people are not deterred from giving in these kinds of situations, coverage must be balanced between holding donors to account with showing what progress has been made.

Stories are still coming out of families surviving against the odds to become reunited.

But Jean Renald Clerisme, a presidential adviser, claims that less than 2 percent of the aid pledged has been received.

A BBC news report showed a church group digging themselves out of the rubble.

Is this community empowerment, or an example of a lack of help from the outside world?

With expensive foreign news bureaus closing, it is becoming increasingly difficult for people to get a true picture of the world.

Ultimately the BBC has the pleasure of being founded in a country that doesn’t experience emergencies of this scale.

Maybe, all things considered, six months is too early to ask.

What do you think?

Alistair Campbell stumbled on his words. For the first time I have ever seen, he has lost his cool. But this wasn’t during the Iraq Inquiry.

Like Fern Britton, the ‘morning political heavyweight’ who tackled Tony Blair a few weeks ago, Andrew Marr sleighed yet another New Labour Dragon on the sofa.

Campbell regained his composure during the Sunday morning roasting, and blamed the persistent line of questioning for his hesitation; the media is out to get him, a claim reiterated on the couch with the Loose Women on Tuesday.

But the real questions, it seems, are being asked outside of the investigation.

I visited the Iraq Inquiry, jovial… rather sadly, that I’d managed to get a ticket to see Tony Blair. Here, after yet another Inquiry, his uppance would come…

Blair was made Middle East Peace Envoy for the UN, the EU, the US and Russia on the day he left office in 2007, (yes, after Afghanistan and Iraq), yet he took the photo-opportunity to condemn Iran throughout his evidence.

He spoke of “security”, “fear”, “risk” and “attack” but just how alarmed should we be? After all, the Iraq War was supposed to make our streets safer?

The BBC reported on the 23rd January that “The UK terror threat level is being raised from “substantial” to “severe”, Home Secretary Alan Johnson has said.”

Almost as unclear as some of Blair’s justification for war; “What if the intelligence was right and we hadn’t acted?”, “If Saddam was getting WMDs, I thought he might attack the UK”, “It wasn’t something that people disputed at the time”.

“The relationship with the US is vital for our security” Blair urged, “I didn’t want America to feel like it was doing it on its own”. Since Barack Obama came to power, he has distanced himself from any “special relationship” with the UK. Probably out of coolness, to shake off the International Lap Dog.

Ultimately Tony Blair’s defence of the ‘intelligence’ on Weapons of Mass Destruction was, “I believed it, beyond doubt”.

From Thatcher to the height of the Blair reign, the position of prime minister has centralized to the point where Blair allowed his own judgment to be the justification. David Cameron is reportedly checking all Tweets made by his shadow ministers in the run-up to the general election.

The lines of question were often probing: “Whose advice were you listening to who didn’t agree with you already?” Chilcot queried. Blair was also lead around a series of “Why Iraq, why now questions”.

But to the dismay of the 700 people who thought they had the golden ticket, they couldn’t get the same answers Fern Britten had pleasantly posed before he appeared.

One only need see the sign of a protester outside the building to see what ‘the world’ might now think: “7 million Iraqis killed, injured or made homeless since 2003”.

Associated Press estimated last year that more than 100,000 civilians had been killed, but for every innocent person, there are relatives who have lost a loved one, looking for somebody to blame.

A protester was restrained trying to perform a citizen’s arrest on Blair, influenced by arrestblair.org, a website offering a reward to people “attempting a peaceful citizen’s arrest” on Mr Blair “for crimes against peace”. But he left without detention.

Peter McKay said in the Mail “Perhaps we need an inquiry into inquiries themselves — how they are set up, why some people are chosen for them above others, and the true motives of those who decide to have them.” And, apart from the format being the obvious flaw, I’m afraid he might be right.

The Metropolitan Police declined to comment on how much the policing of Blair’s Second Coming had cost. But a helpful Met Police Officer who had been drafted in for the day said that just outside the building there were more than 150 officers- four higher ranking officer per patrol of 21. You do the maths.