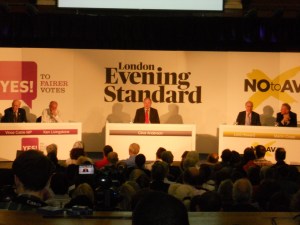 I went to an event at the London Evening Standard about the change to the voting system.

For the ‘Yes’ campaign, Vince Cable and Ken Livingstone, and for the ‘No’, Lord Michael Howard and some Olympic rower.

It transpired, inevitably, that the ‘Yes’ campaign were not arguing for their preferred system, Nick Clegg called AV a ‘miserable little compromise’ some time ago.

Michael Howard took his chance at the lectern to read a very compelling speech as his line of attack:

“… And that speech was written by none other than… Ken Livingstone.”

Today, some of the country might vote on an historic referendum to change the way our country elects its representatives.

Why, in such an objectively sensitive change, are people not more engaged?

On the eve of the vote on AV, I would, if there was the option, urge you all to vote ‘re-open nominations’. Which system will allow more people to get involved, because I’m sick of this.

Led by a laughable, disgraceful field of people who are frankly crooks, liars, cronies.

Men who, let’s face it, cannot keep their hands to themselves. In one way or another.

Gaffy nerds who wouldn’t know the big society if it was outside, just before the gated wall protecting their new money/old money first, second or third home.

Sadly, today, there will be no revolution here.