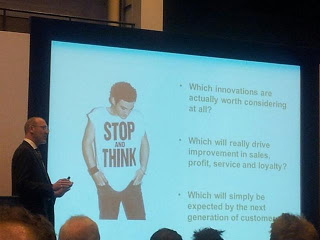 John Lewis is held up as something of a model business in the retail sector, with its democratic structure and lean approach to bricks and mortar – it has just 35 stores serving the whole of the UK.

In his keynote at Retail Business Technology Expo, the company’s head of IT infrastructure, Julian Burnett, explained how the organisation approaches new technologies.

“There are endless new a novel ways to explore technology. The question is, how do companies differentiate themselves from competitors and create an interesting proposition for customers? There has been an explosion of new channels – many of them are relevant – so you have to decide how relevant they are to your business.”

The company trialled an augmented reality ‘magic mirror’ in its Oxford Street store – but Burnett admitted that it did not increase sales or “create something compelling and sustainable for the business”, so the retailer did not continue with their experiment.

He said John Lewis will be trialling RFID chips in its clothing departments soon, which could take the form of tagging clothes to monitor stock levels, automatically re-order items and help staff find things that have been ditched by customers.

“You have to get used to failing fast in innovation – you can waste a lot of time, money and energy if you don’t. You know when you’ve found a winner if it has a sustainable role to play in your organisation.”

The company is starting to use technology in stores, possibly a mobile wi-fi solution, to gather anonymous data about shopper behaviour to help maximise the spaces they own and rent.  Burnett said this was only “initially on a passive basis”, so will potentially lead to opted-in location-based loyalty programmes.

On mobile payments, he admitted that John Lewis isn’t certain on which way it is going to go. “For an organisation like ours – it’s a big bet to place on the technology in this space. Will we all be using mobile phones as digital wallets? We’re not sure. Are we going to get to a position in five years’ time where some of us have gone down a blind alley? We’re still hesitant on the whole topic of payments.”

Burnett was excited about the potential for new technologies to improve the back-end of the business. Last year, John Lewis invited 30 British businesses to tackle three real business challenges in its retail stores. The winners were Black Marble, a software consultancy firm who offered a tablet solution to the problem of stores being flooded with last-minute back-to-school shoe shoppers. This is now being trialled in three stores, and the competition will become an annual event.

The company has an innovation board that meets monthly to consider a whole range of challenges and opportunities. They recently asked the partners (that’s everyone in the company) to suggest their own business improvement ideas – and received 127. The eventual winning idea will be trialled and if it meets the business tests, it will go into full scale implementation.

On big data, despite noting the “big hype”, he said all retailers and other industry players are trying to work out how to bring together the large amounts of structured and unstructured to gain insight. “Back office data is outlegging the level of data in the front office,” he said. He also praised the cloud. “We don’t need to own anything. The pace of change that we’re faced is so dram that our ability to respond as an IT function makes it all but impossible to run traditional data services.” He said they are also actively looking at how John Lewis can take advantage of app stores for corporate purposes.

“We have to balance innovation with 50 years of investment in IT infrastructure. My job is to filter out the noise and focus on the things that will give us the best advantage against competitors on behalf of customers and partners.”