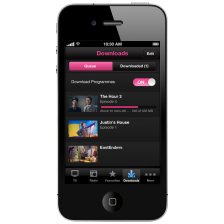 Mobile now makes up a quarter of all iPlayer traffic after a 177 per cent increase in smartphone and tablet usage during 2012. For the first time in its history, PC traffic made up less than half of all visits, 47 per cent, in December. Along with mobile, connected devices, including games consoles and smart TVs, make up the remainder.

The iPlayer app has now been downloaded 14m times, including 300,000 on Christmas Day alone. Mobile downloads of BBC programmes have proved a massive hit, with 10.8m downloaded to iOS devices since the service launched in September. They have quickly taken a 6 per cent share of viewing on mobiles and tablets. The majority of viewers download programmes at 10pm and watch them on the way to and from work at 7.30am and 5.30pm, the BBC has found.

2013 has had a strong start, with 6,732m requests for TV programmes on January 1 alone, the most ever seen in 24 hours. The Olympic Opening Ceremony topped iPlayer viewing, followed by Top Gear and Sherlock.